started a topic over 4 years ago

This post is meant to float the idea of Automated Execution in the Director. This is hopp's initial suggestion on how to implement such a feature. We hope to receive valuable feedback in order to mature the idea into a proposal to include in the migFx road map.

One of the major characteristics of migFx is the ease of iteration. The Studio, Engine and Director components in unison significantly simplify the task of iterating the migration of selected Business Object instances.

The complete list of steps in a migFx iteration is

In addition, migFx iterations are typically performed in one of these distinct contexts

At present, migFx offers no facilities for Automated Execution. This makes it necessary to manually prepare and manually monitor the execution of the subsequent jobs in the Director in order to launch jobs as predecessors finish. Especially regarding the internal iterations - of which there ideally is quite a few - this places strain on the team members assigned to the actual execution of complete, internal migration iterations.

Given the use case above, it is clear that some of the steps are job running in the Director runtime and as such obvious candidates for automation. Other steps are more or less manual and to a lesser degree suitable for automation.

Based on these considerations, our ambition and scope for automation is initially limited to handle

Given this scope, the workflow for an initial implementation would be like

Launching an automated iteration as above will typically be done

It is true that the present situation today with no automated execution does place an unnecessary strain on the team member that is tasked with overseeing especially the internal test iterations. These are typically run overnight, and somebody must remain awake (or repeatedly wake up) in order to launch jobs when ready. In practice, this places a limit to how often internal test iterations can reasonably be executed. This is a shame, because frequent iterations undoubtedly lead to improved quality.

However, having a set of human eyes on the progressing execution does have the advantage of a constant assessment of the quality of the running migration. It happens frequently that the iteration is manually paused due to some issue rendering the results meaningless, some corrective action performed, and the iteration resumed to a significantly improved conclusion.

As outline above, the initial scope of Automated Execution is limited to initiate and monitor the steps of a complete migration iteration. The steps to be executed depends on whether the migration project is an 'Export Only' project or an 'Export and Import' project. The steps and their dependencies are illustrated below.

Each of the boxes in the figure above illustrates a step of an Automated Execution. Some of the step consists of only 1 job, other steps of multiple jobs, all of which must complete before releasing any succeeding steps.

There is a duality here that is important to understand and master in the design of Automated Execution The migFx Director already contains the functionality to parameterise, execute and monitor jobs. But an automated execution is not just a series of jobs, but rather a series of steps, each of which consists of one or multiple jobs, that must complete before subsequent steps can be released/submitted.

The existing job scheduling infrastructure can handle the execution of the jobs of each step as outlined above. However, in case one or more jobs of an Automated Execution fails, the existing ability to restart a failed job from the point of failure may not be enough. In many cases, it will be desirable to be able to perform some corrective action and re-run the failed job from start - not just from point of failure.

It is not possible in the present job scheduling infrastructure to restart a failed/canceled job from scratch. In the present infrastructure, a new job must be submitted in this case - raising the question how this new job would relate back to the governing Automated Execution of the original job.

To overcome this limitation, we suggest to extend the existing functionality to either restart a job with an option to restart from point of failure/cancellation (as today) or restart from scratch (new). Restarting from scratch would simply mean erasing the committed restart restart information for the job before submitting a new job instance as usual.

This new restart from scratch option will be available in the Job List for all jobs, not limited to jobs submitted by an Automated Execution.

An Automated Execution can assume the following states below until completion 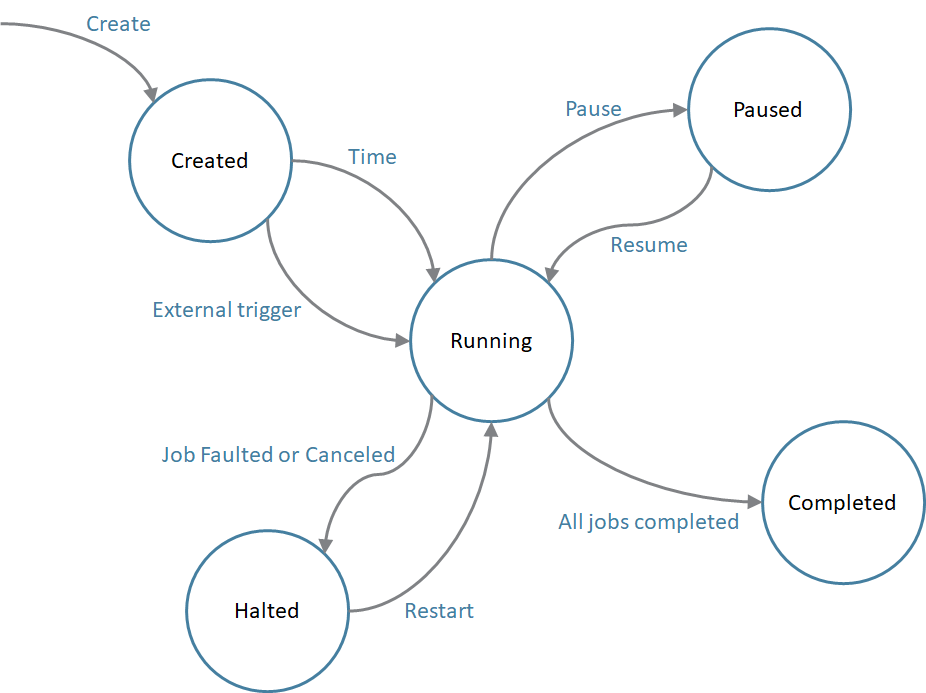 When setting up an automated execution, each job must be parameterised:

In addition, the automated execution itself could be parameterised. For instance to define the time on which the execution should start, but perhaps other parameters could be relevant (callout for suggestions, start on OPC trigger?)

The individual jobs constituting the automated execution will appear as all other jobs in the Director job list. Once a given step is ready to run, the jobs of the step will be submitted (not at once in a held state). This allows for the edit of parameters of steps that has not started yes, as described above.

The Automated Executions will appear as a list in a new panel in the Director UI. In this list, it will be possible to drill down:

The actions and information available on each level in this drill-down are: