started a topic 12 months ago

As laid out in the article Publishing Maps and Deploying Engines, the Source- and Target Engines for a data migration projects are normally deployed to the Directors Runtime environment to be loaded into the track where migration jobs are then executed.

But in many cases, you may want to test and/or debug a newly generated engine - or indeed a new or modified manual rule - in order to verify that everything is ok before actually deploying the new engine.

This article describes exactly how to do that.

As will be clear below, debugging the engine means running the engine in a local process on your own computer and connecting from this process to the Staging- and Migration Database of the given track.

This will only work if the process is able to establish a connection to these databases.

With this important prerequisite in place, let's get to it.

At the end of the day, the goal here is to allow you to step through the code in Visual Studio on your own machine.

Here's an outline of the process to get to this point. Each step will be described in detail below.

Let's say you want to debug a manual rule implementation. Open the rule in Visual Studio and click in the left hand gutter to set your breakpoint.

Below the breakpoint is set in the Exit Rule CreateMissingInterests.cs in our demo Target Map. 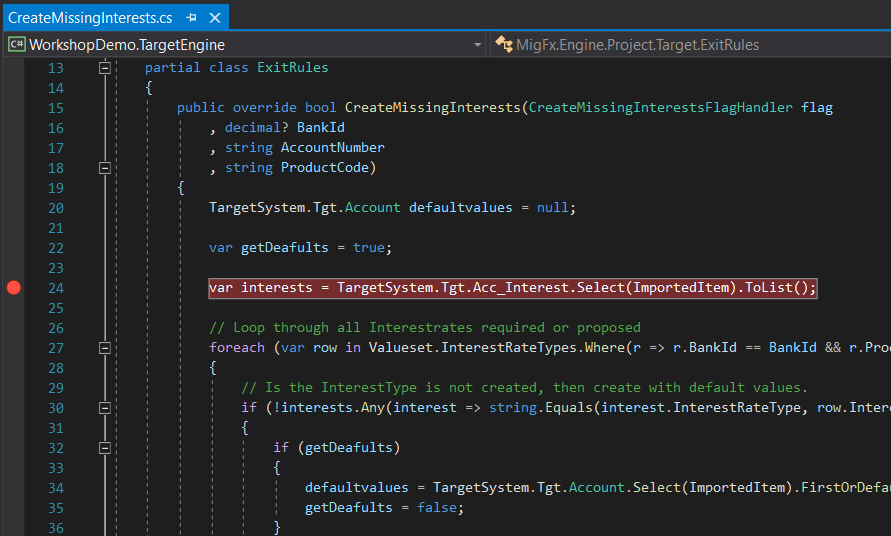 Right-click the project in the Visual Studio Solution Explorer and choose the Debug item from the migFx sub-menu.

So, Visual Studio launches an instance the Director, and the Director will query the runtime environment to show you a dialog to select a track and what to debug in this track.

Visual Studio will now wait for you to make your selections and for the Director to do its magic and communicate back the id of the process to debug.

Once the Director has received the necessary info from the runtime environment, you can select exactly what to debug from the dialog. 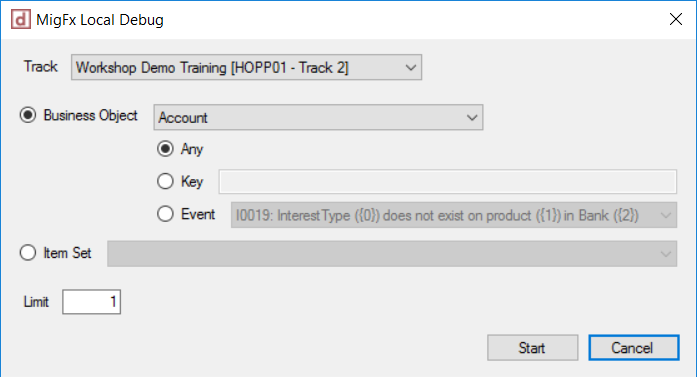 Firstly, if the engine is deployed to more than 1 track, you need to select the track in which you want to debug.

Once the track is selected, you have several options to select what you want to debug in this track. These options are similar to the options in the Director to choose which Business Objects to export/import.

Once the selection is completed, click the Start button to start the debug session.

The Director will first close the selection dialog and then go to work:

5. Step through the code

The debugger is now attached and the process running the job is free and will continue on to - hopefully - hit your breakpoint. Hopefully, because the job may in fact exit without ever reaching your breakpoint.

For instance, consider these situations:

In these cases (and others) it is up to you to rectify the issue and retry the debug session. The log output from the job will appear in Visual Studios Output tool window, and you can probably find information there to explain why your breakpoint wasn't hit.

If no issues arise, the process will continue until it hits your breakpoint, at which point you can now single step through the code using the normal Visual Studio shortcuts. Normally F10 for Step Over, F11 for Step Into and F5 for Run to next breakpoint (or to finish if no more breakpoints) 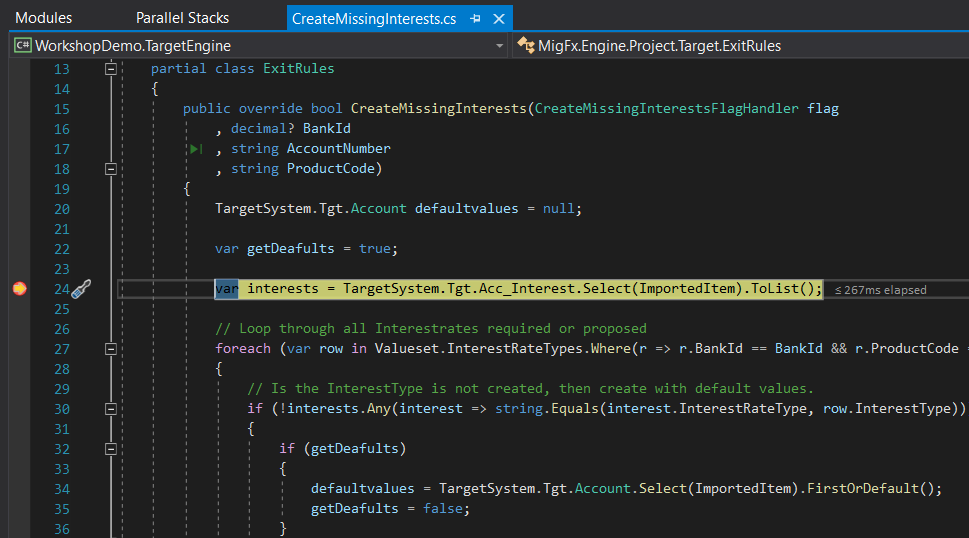 Once you are ready to finish up, you can either hit F5 to tell the debugger to run to next breakpoint (or to finish). Or you can detach the debugger from the process and allow it to run to finish on its own.

You detach from Debug in the Visual Studio main menu

Once the local process has exited, the Director - who has been patiently waiting for this to happen - will spring to life and delete the temporary folder containing the Director Runtime that was downloaded, leaving no trace behind on your machine.

This instance of the Director is now finished and will close down.

Running a test of the local version of the generated engine is pretty straight forward using the migFx functions provided in Visual Studio.

As outlined above, you can use this to debug manual rule implementations. But you can also just test an engine that has been generated based on some new mapping before deploying the engine for real.

A final note: Even though you are running a local process on your own machine using the local version of the engine, you are in fact migrating the selected items in the chosen track. So your job naturally shows up in the Directors job list: