In relation to the iterative process of migFx - illustrated below - in the last section of exercises you have been in the step Test & Feedback, analyzing the Events that were fired during the iteration of the Card Business Object. 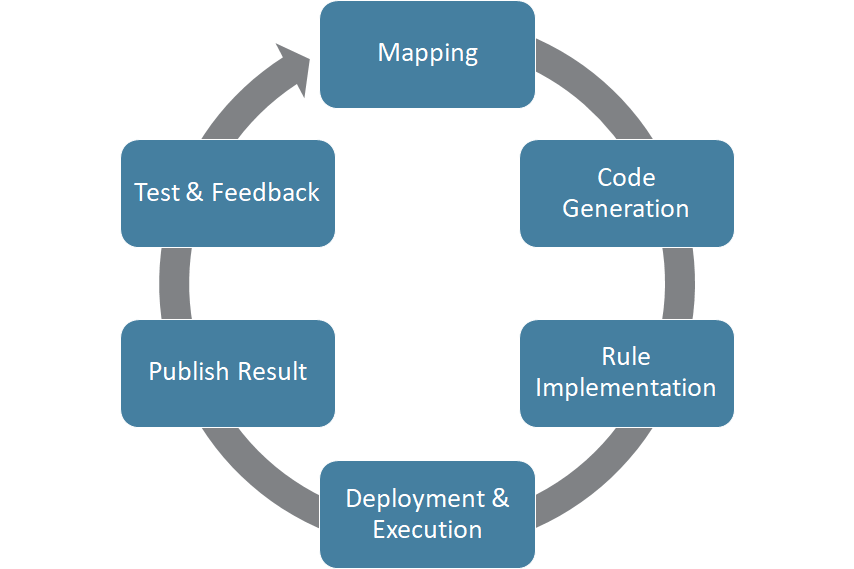 In fact, in earlier exercises you have covered each of the steps in the process, so there is really nothing new here. The aim of this section of the training exercises is to tie it all together by letting you solve some of the Events that occurred in your iteration of Card as well as in earlier iterations of Customer and Account.

Let's start out with the last Event I0025 - Card Status ({0}) is unknown of the previous exercise. A large count of Card Business Object instances are rejected due to an unknown CardStatus Blocked. It turned out the root cause is that this CardStatus is missing in the static Valueset CardStatus in the Studio Target Map.

Let's assume you - or other members in the migration team - has had a dialogue with a specialist from the Target System.

It is worth noting that the static Valueset CardStatus was modified by typing the new CardStatus directly in Studio. The data content of all static Valuesets are 'baked into' the generated Target Engine. This has implication for a later step in this exercise, when the migration of the affected Cards is iterated.

In this case all the modifications necessary have been done by modifying in Studio. There are no manual rule implementations to modify.

Now the new code for the target Engine has been generated, it's time to deploy the engine in the migFx runtime.

Finally everything is ready to iterate the import of the Cards that fired the Event I0025. The Director makes it trivial to pick out just these Card to import:

When the job finishes the iteration of the Cards that fired Event I0025 is finished. It is now time to publish the results of the iteration to the Portal.

Go to the Tracker and view the Event list for Card:

The count for Event I0025 is now zero and the state has changed to Done.

In the exercise introducing the Tracker interface, this state - as well as the other list states - are explained: Exercise 5.2 – Get Familiar with the Portal User Interface.

If you're happy with the result, then commit your changes to the Repository.

Congratulations, you have just completed a complete iteration cycle of migFx!

Combined with the last section of exercises, we hope this has given you an impression of the unique capabilities of migFx: