In the previous exercises in this section you have prepared the Director Runtime to actually migrate Cards. You have:

So now you are - almost - ready to execute the migration. Well, in fact you are, there is just a little thing you should note at this point.

You probably remember the Constants in Studio and how they came in two flavours:

Before starting any new migration iteration it is prudent to assert that the current values for the Runtime Constants are set correctly. You can see and correct the values for these by selecting Source/Parameters or Target/Parameters in the Director menu.

Here as an example are the Target Parameters:

In this case, the values of all the Parameters are correct, so you don't actually have to do anything.

The migration is a two step process involving Export and Import, entirely corresponding to the separation in Studio of the Source- and Target maps.

The Source Engine is executing the Export, exporting the Business Object instances from the staging database producing the Export result for each instance:

The Target Engine is executing the Import on the exported Business Object instances producing the Target result for each instance:

Card is present in the list but obviously no instances are exported yet. The meaning of the columns are:

There are no dependencies in the export of Business Objects. If you exported all 3, Account, Card and Customer, the Director would submit 3 jobs to run in parallel, one for each. In this exercise however, you will only submit a job to export the Card Business Object

With minor differences the Business Object Selection dialog is used to submit jobs several places in the Director interface. Let's have a quick look at it: 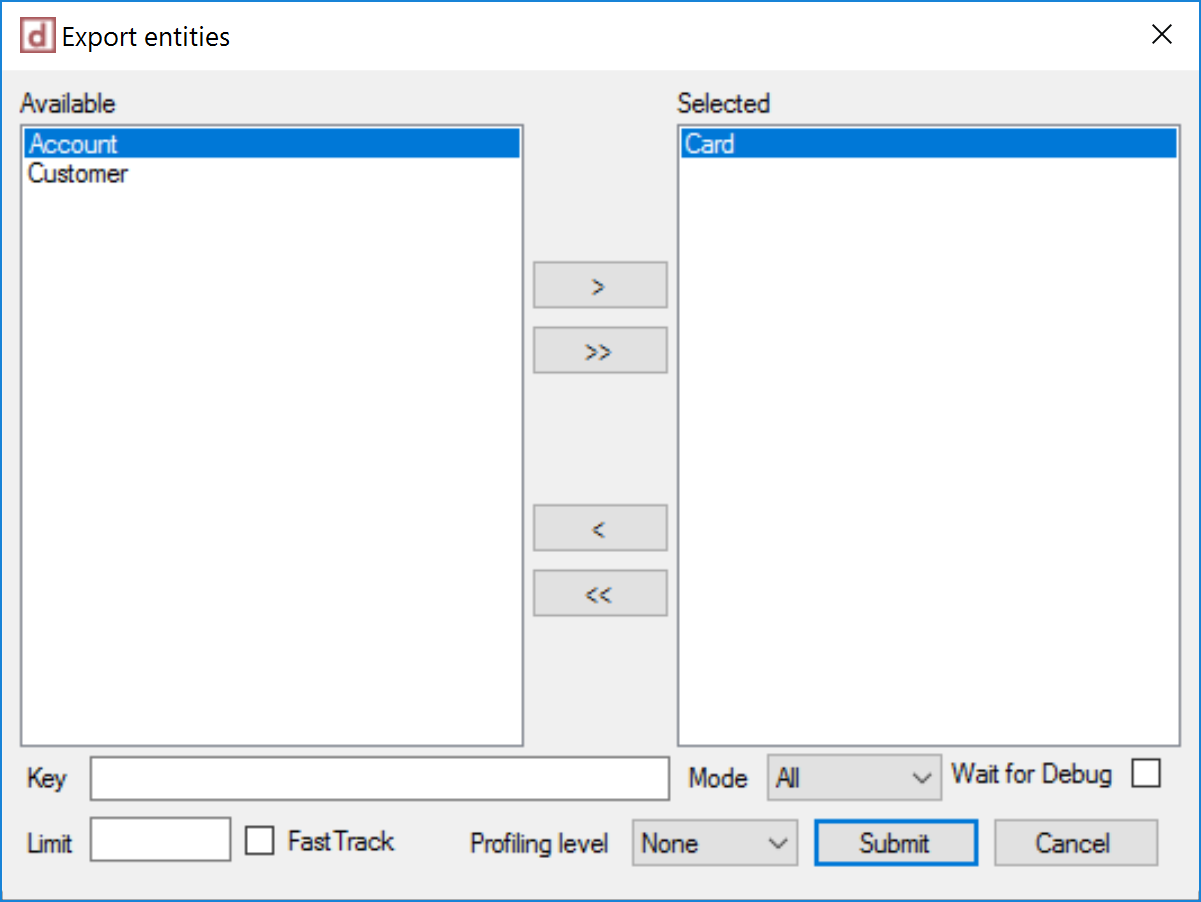 All you have to do is check that the Card Business Object is the only one in the Selected box and click the Submit button to submit the job.

Once the export job has finished it's time to do the import. Select Target/Objects in the Director menu.

The Director handles the resolution of these dependencies in several, different ways. First of all, there is the Full monty button. By clicking this you simply ask the Director to import everything automatically resolving the dependencies along the way.

This selection dialog looks much like the same dialog for the Export above. There is one difference, though. Instead of the Fast Track option, the dialog now shows different options for handling dependencies, depending on whether one of more Business Objects are selected for Import

Dependency resolution is recursive. In fact, the Director runtime simply splits the import up into levels. All instances at a given level are imported before proceeding to the next level:

In the case of importing the instances of Business Object Card, it's quite simple. While Card has relationships to both Account and Customer, we know that there are no Business Objects with any Relationship to Card. So you can just select Card for import and click the Submit button to submit the Import job. In this case it makes no difference if you check Include Descendants or not.

After much ado leading up to this crucial moment it probably turned out to be quite boring to actually migrate the Card Business Object instances by executing the Export and afterwards the Import. But, hey! That's somehow the entire point of all this, to provide a consistent and complete toolset to deliver complete confidence and a logical approach to break down this highly complex problem domain - so in the end the task really ends up being trivial.

Take a moment to reflect on what happened here

Of course, everything remains somewhat under the hood in the Director. In the next set of exercises you will start out by publishing the migration results in the Tracker.

But there are actually stuff available already in the Director:

S
Sune is the author of this solution article.